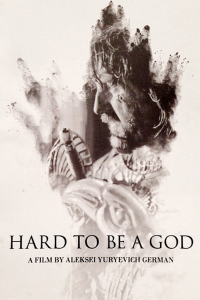 How does one even begin to review, to assess, to assimilate Aleksei German’s “Hard To Be a God”?

Any discussion of “plot” or “character development” is absurd. Dramatic arc? The ol’ three act structure? Fuggetaboutit. I challenge anyone who hasn’t read the Strugatsky bros. novel that serves as the film’s source material to accurately summarize the alleged storyline. The movie defies exegesis; indeed, I would say German deliberately flouts expectation, convention. Method and madness intertwined.

But putting that aside, I come away from this movie with nothing but admiration for it. Despite its inscrutability or because of it (I’m not certain which).

German makes no compromises with this production and that single-mindedness, the willful determination it must have taken to get a film like this made is, I think, its most admirable quality. His vision was translated to the screen with absolute faithfulness, every effort expended to make sure each scene and set-up met his exacting specifications.

And then he had the misfortune to die while the film was in post-production.

Never mind, Svetlana Karmalita (German’s wife and artistic collaborator) and his son, Aleksei Jr., oversaw the completion of the “Hard To Be a God”, ensuring that it remained true to the director’s conception.

It is a world of mud and offal, open sewers and constant sickness. Festering sores and long strings of snot. Malformed, twisted, freakish faces. Intellectuals and “bookworms” ferreted out and either strangled on public gibbets or burned alive like unrepentant heretics.

There is no beauty, no color, no art…the Renaissance will never subvert the cultural and political spheres of this medieval, backward society. The populace destined to live out their lives in poverty and squalor, suffering and enduring under one iron heel or another for many centuries to come.

The Grays. The Blacks. Does it matter whose foot fits inside the hob-nailed boot? Here, the inquisitors and pious murderers have won. It is they who will make the future, not Michelangelo or Leonardo.

The Dark Ages have arrived.

And these barbarians kill in the name of God.

“Hard To Be a God” (Official Trailer)

This site uses Akismet to reduce spam. Learn how your comment data is processed.