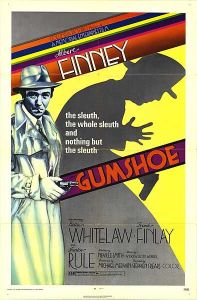 A true cult film, difficult to find (at least in North America).

Eddie Ginley (Finney) is a lovable loser, a Liverpool bingo caller and aspiring comic so ineffectual that he can’t even prevent his last girlfriend from running off and marrying his sleazy brother.  Eddie’s latest scheme involves taking out a newspaper ad promoting his private eye agency, a venture almost certainly doomed to failure.  His first case comes his way purely by accident but never mind—he’s soon embroiled in shenanigans that involve kidnapping, gun-running and African politics.  To his credit, Eddie manages to hold his own, doggedly pursuing his adversaries, even as the full extent of the conspiracy becomes painfully clear.

Finney is fun to watch, slouching about in his trenchcoat, snarling Sam Spade-like rejoinders, but the plot meanders, the convolutions distracting rather than puzzling.  A sweet-natured homage to classic detective books and movies, a tip o’ the hat to Chandler and Hammett.  Reminiscent in tone to little gems like “They Might be Giants” (1971) and “Morgan: A Suitable Case for Treatment” (1966), recalling an era when films could be quirky without descending into treacle.

This site uses Akismet to reduce spam. Learn how your comment data is processed.